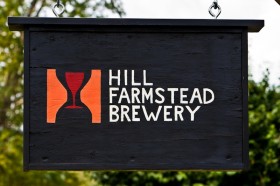 Fact: Vermont makes very, very good craft beer. And beer lovers are flocking to Northern Vermont to taste (and fill their trunks) with all the nationally award-winning craft beers made right here in the Northeast Kingdom. Our guests love to go on our “Top Local Breweries Tour” – featuring the best of the best for Vermont craft beers.  Case in point, the world famous Hill Farmstead Brewery in Greensboro, Vermont has become the ultimate beer pilgrimage. This is why we proudly list it as first place for our Top Six Brew Tour. Here’s what you need to know:

The Alchemist Brewery in Waterbury, VT: You’ll taste a good variety of great brews here. The Alchemist is home of the flagship double IPA, Heady Topper!  Heady Topper is the third highest-rated beer in the world, according to BeerAdvocate.  Beer pilgrims come from afar to get their hands on this beer.  People still hoard Heady Topper beer.  Go there. You’ll start hoarding it too.

Trapp Lager Brewery at Trapp Family Lodge in Stowe, VT: Known for their traditional European style Lagers; you can taste a flight of varieties in their bakery/Deli.

Rock Art Brewery in Morrisville, VT: These guys produce a large variety of Vermont beers — 17 at our last count.  Tastings and self-guided tours await you here.

Kingdom Brewers in Newport, VT: This northernmost brewery in Vermont sits high atop Coburn hill in Newport Center one mile past the end of Route 100. Brian and Jenn Cook started Kingdom Brewing with the intent to brew terrific craft beers with American grains and local ingredients. Visit them and their beer- loving Angus herd.

These are just a few of our favorite Vermont craft breweries. Next time you stay at Rabbit Hill Inn, be sure to plan a day to go on a Brewery Tour.  There are so many others to explore. Check out the official Vermont brewery map.